In today’s post I am revisiting London’s famous Highgate Cemetery; well-known around the world for its overgrown graves and rather eerie Gothic allure. Less famous, however, are Highgate’s numerous war graves, and it is these graves that I put my attention to. Highgate has a surprising 316 graves registered by the Commonwealth War Graves Commission. Although I tried, I was certainly unable to locate them all; so until I can return to Highgate and continue my photographic quest, I hope the photos in this post and Pt. 1 are a good start.

Lieutenant T.A. Prior of the London Rifle Brigade, died 1921 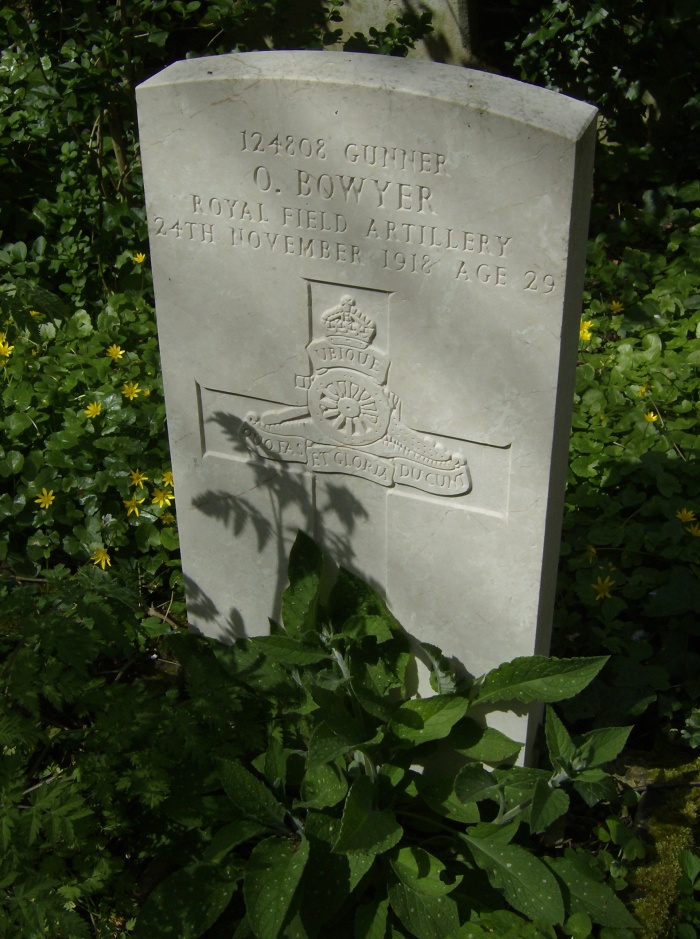 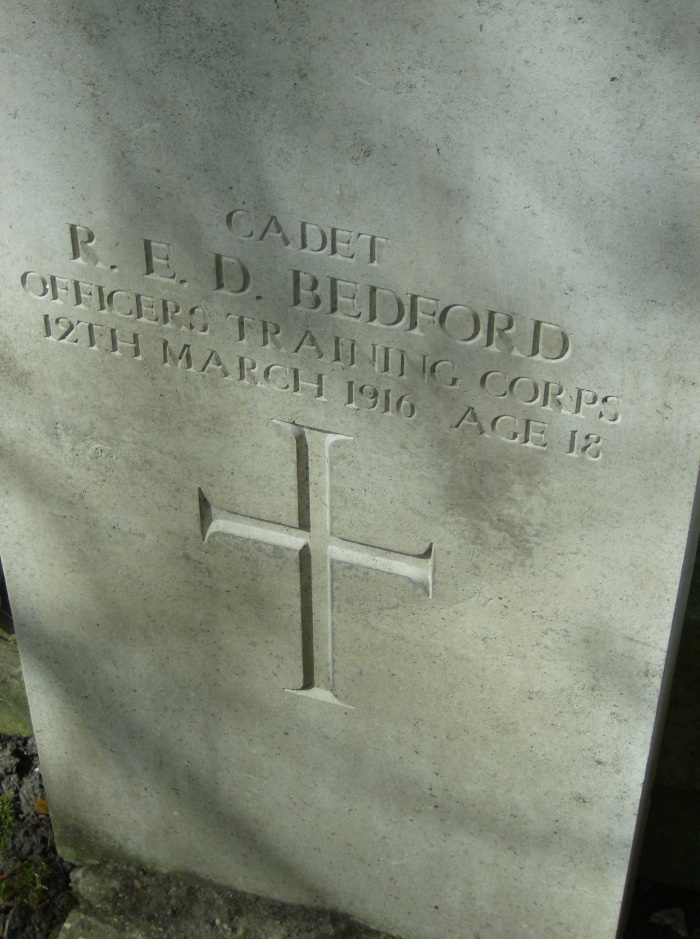 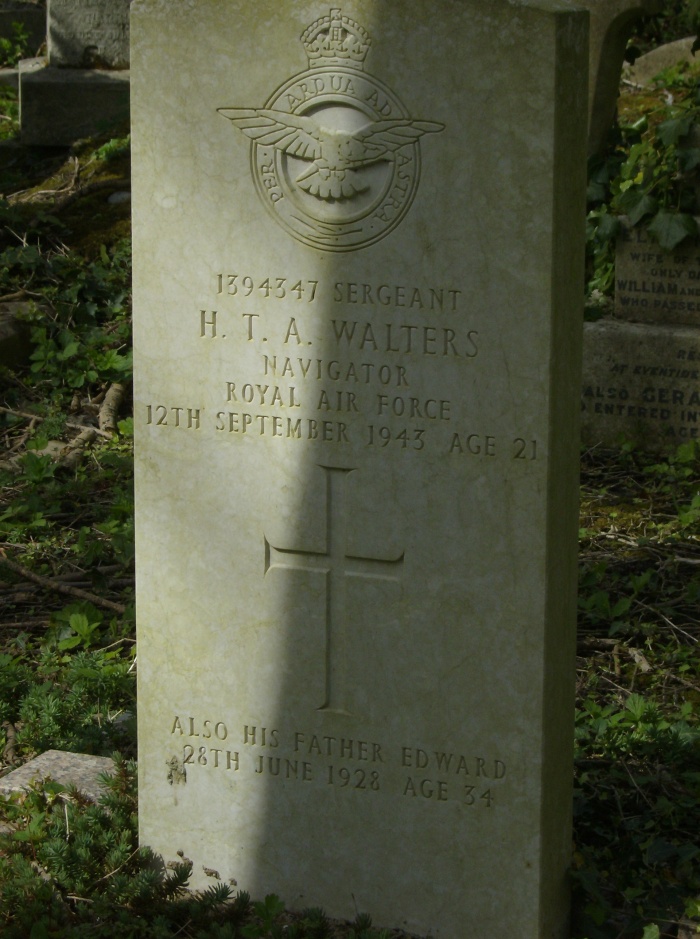 Lieutenant B. Conan-Davies of the York and Lancaster Regiment, died 1918

Highgate feels like a forgotten place– it’s so quiet and isolated under the leafy boughs and strains of ivy that have taken over the cemetery. But perhaps that silence and isolation symbolises the rest that the soldiers buried here deserve, after their courageous service and the violent, horrific experiences they surely had. And I hope that these posts have helped to ensure that they are remembered.

As a writer, I hope that I am adept at observing and communicating truths about life and the world we live in. One of my favourite things to do when writing is to take an observation or emotion I have experienced, and translate it into a whole other setting. For example, many of my World War II poems (such as I Wish you Well, my Lonely Friend) are inspired by my own sense of nostalgia and memories of all the things I’ve loved. I constructed the following poem with something of a mythological medieval theme; and although it is bitter and depressing it speaks to the pervasive greed and selfishness that I see in the world. Although it’s one of my unhappier pieces, I hope that it is accurate in its meaning and that you will appreciate it.

Poison from the mouths of vipers

Is there a more insidious thing?

It mires the ground and dirties

Even the air you’re breathing

And as they smile, their venom seeps

Unseen until it strikes the heart

No antidote til the hour is late

Death will be your counterpart.

Vipers held by chains of flattery

The sick designs and whims of kings

Whose own lives are so hollow

That they delight in pilfering

All the gold and light from others’ eyes

Sat safe in gilded rooms they are;

While the kingdom, weakened, dies.

These glorious kings and their vipers

Believe each lie they have spoken

Their greed a venom from their own veins

If I’ve learned anything over the past week, it’s that working in 40 C humidity is not an enjoyable thing to do. I usually hate the idea of a desk job, but this week sitting idle in an air-conditioned room would have been much nicer than moving a trailer full of cumbersome parts and washing cars like I was doing. But, my fellow suffering shop-workers and I made the best of it– living on freezies and huddling near the desk fans whenever we had a moment to spare. We managed, it’s just a shame that this coming week is going to be just as hot and sticky… Anyway, at least the heat inspired my latest post. Hot climates have a certain allure to them, and today I was inspired by the bright colours and rich history of Africa.

Echoes of Africa by adairjacobs on Polyvore
Maison Ullens beige tank top / Yves Saint Laurent 80s jacket / Jaeger breathable pants / Christian Louboutin lace up shoes / Les Petits Joueurs leather shoulder handbag / Cathy Waterman white diamond earrings / 18k jewelry / DANNIJO boho bangle / Salvatore ferragamo scarve / MANGO metal glasses
I began with traditional safari-style separates; in this case, a vintage safari jacket and chic green trousers. A camel-coloured tank top continues the colourway, inspired by the vast expanses of the Serengeti. The Salvatore Ferragamo scarf adds a classic touch of animal print, while aviators protect against the glaring African sun. Shoes by Christian Louboutin pick up on the yellow in the stand-out tribal-inspired handbag; and fiery red lipstick adds the vintage glamour I always strive for. Finally, the colours in the citrine jewellery recall the brilliance of an African sunset. I’ve never been to Africa, but thanks to this outfit (and the infernal heat of this week) I feel pretty close to it right now!

There must be thousands and thousands of cemeteries across the world; but the most famous one is probably Highgate Cemetery in London. A Victorian creation, Highgate is a burial ground very different from any other. When I think of a cemetery, I think of ordered crosses in row upon row; or carved headstones laid out on a manicured lawn. Highgate’s aesthetic is completely different, because it is (on the east side at least) essentially a cemetery built in a wood.

I would highly recommend visiting Highgate when in London. It was a very different and restful experience for me– nice to get out of the city’s hustle and bustle and instead take awhile in this cemetery full of London citizens to reflect on life and history. My mum and I visited the cemetery just to see the unearthly wildness of it, but my visit became focused on something altogether different. After only a few moments inside the grounds, I spied the first war grave.

Commonwealth war graves are usually marked by a simple headstone of Portland stone. These headstones have an especially resolute look to them in the untamed environs of Highgate.

I hadn’t even expected there to be war graves at Highgate– I guess I thought that war graves are more of a military base or overseas thing. However, I immediately resolved to try to find all that exist at Highgate. Highgate has a very forgotten feel to it, being all overgrown and shaded– and war graves are one thing that I believe must never be forgotten. 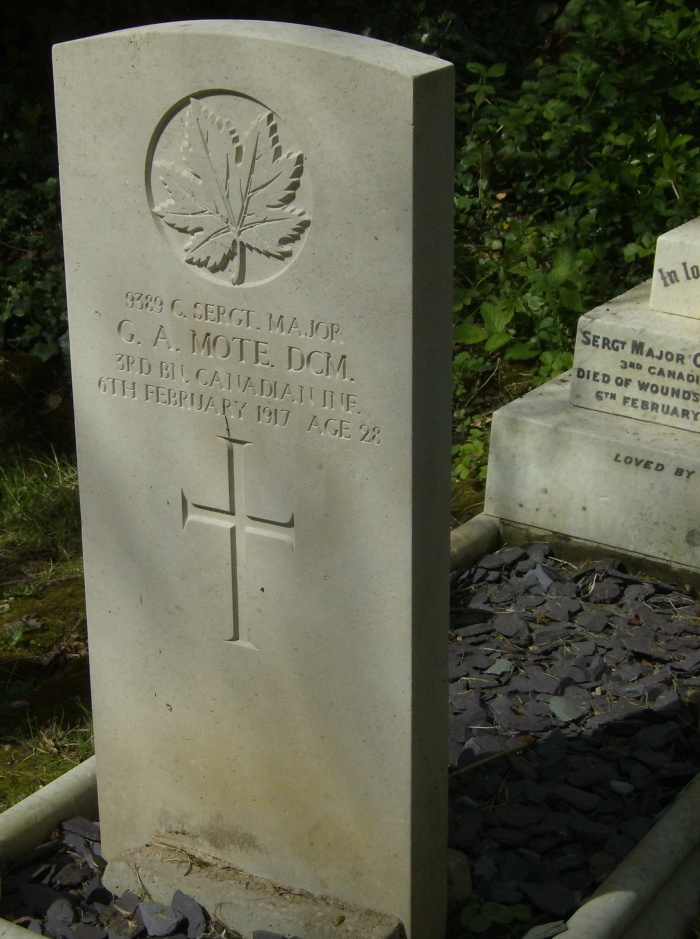 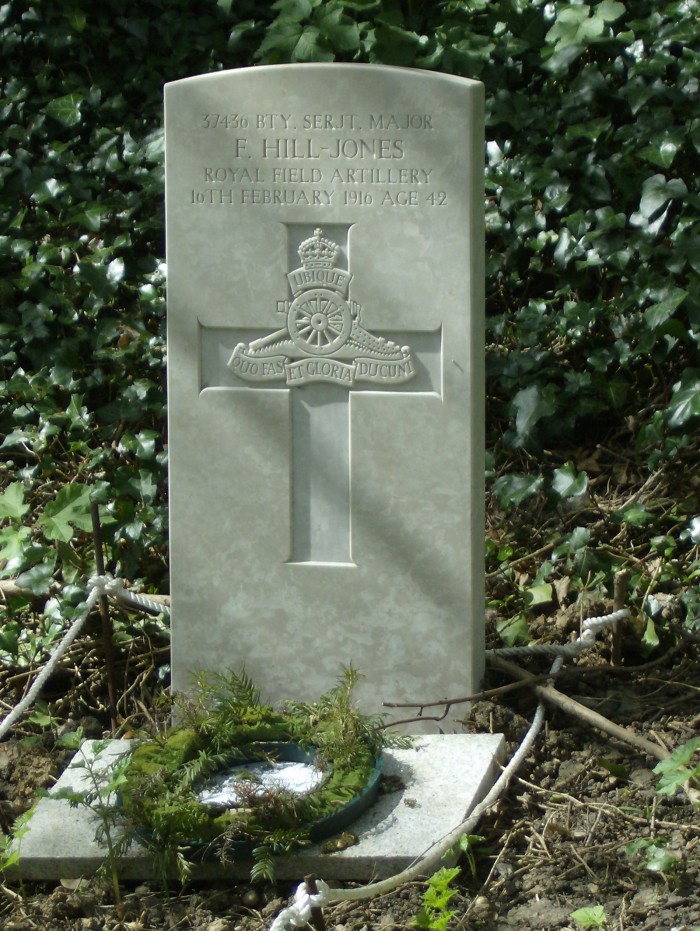 I appreciated the Biblical epitaph on this headstone, sourced from John 15:13. True of all the brave men interred at Highgate, they laid down their lives that we might live.

It’s the Canada Day long weekend here in Canada; and if you ask me, there’s nothing better associated with a long weekend than awesome cars!! Summer long weekends are made for cruising, and now that I have a beautiful car of my own I appreciate them even more. There are multitudes of old muscle cars and vintage trucks driving around on weekends like this where I live– all awesome in their own right. But I do think it would be a great experience to visit England on a bank holiday weekend, and marvel at all the supercars that would surely be seen there!

In Part One of this post, I introduced you to many of the interesting and exotic cars I’ve seen on the streets of London. I hope that Part Two will be even more impressive– motoring in England is very different from North America, and it’s one of the reasons I enjoy trips across the pond so much! 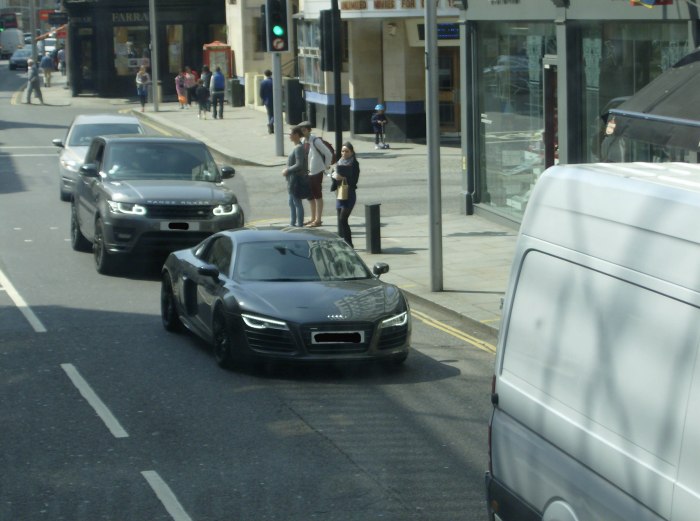 The Audi R8 isn’t quite as impressive-looking as a Lamborghini, but it does produce over 400 horses of precise German power

Seen here near Fulham, this Bentley and others of its kind are favourites of well-paid Premier footballers 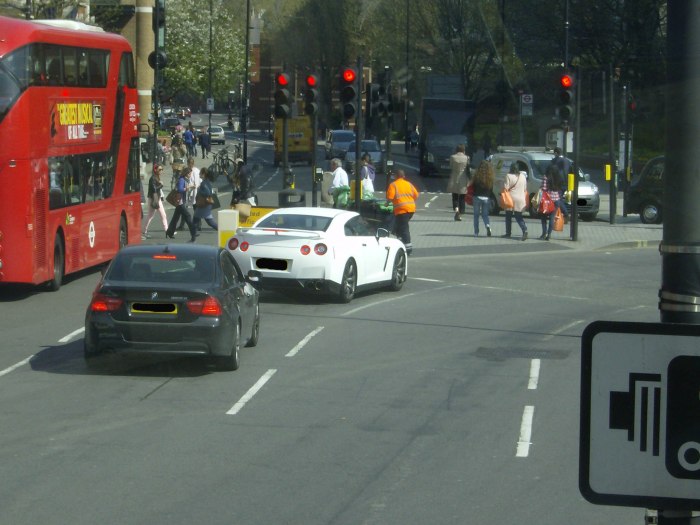 The Nissan GT-R is one of the fastest-accelerating cars on the market today, and it’s one of my dream drives!

This Kensington Ferrari wasn’t getting anywhere fast in the rush-hour traffic. But, there are few things more eye-catching than that Ferrari red…

This loudly-coloured Lamborghini made quite a racket outside our window one afternoon. It sat in the road for a few moments, revving its engine, and then drove off.

Walking home one day, I saw this in a row of cars… a Volcano Red McLaren MP4-12C! 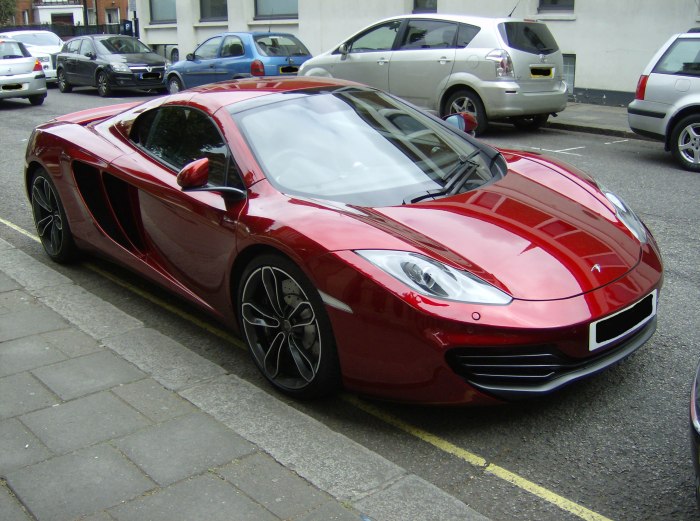 There are few cars more exclusive or well-thought-out than a McLaren. It was a privilege to see one so close in person

I marvelled and marvelled at this beautiful machine, along with several other passers-by! It’s surprises like this that make the streets of England such an exciting place.